“Kindness is the light that dissolves all walls between souls, families, and nations.”
– Paramahansa Yoganandya 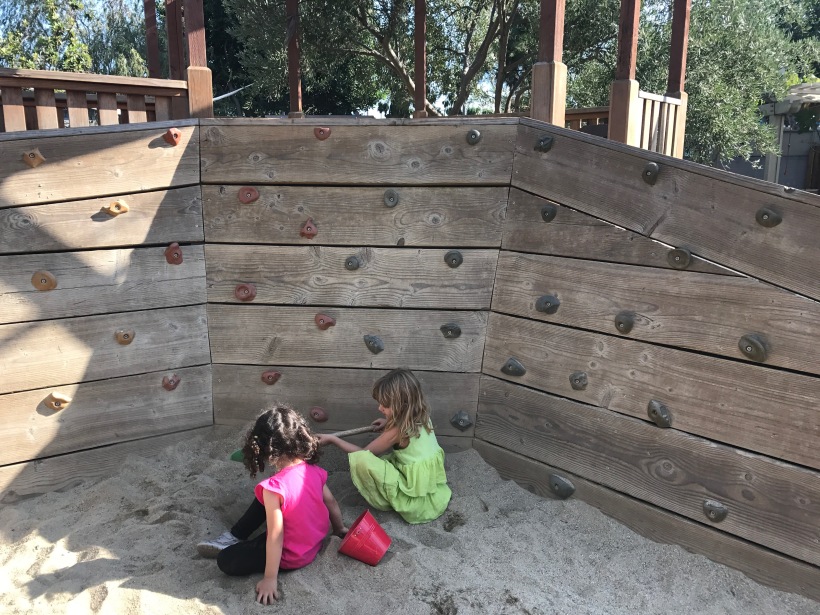 “I can’t get up the climbing wall!”

I heard a voice say, pulling me out of the trance that the quiet calm of the morning had lulled me into. I looked up from the sandbox to see Sienna’s frustrated face staring hard at the rocks of the climbing wall. Looking back at me she repeated “I can’t get up the climbing wall,” adding with disappointment, “I don’t know how.” Feeling how badly she wanted to tackle this challenge I approached her and offered my guidance and support, assuring her that I could keep her safe while she tried different things.

Together we looked at the wall closely, thinking about where she might start. I asked her what ideas she had and what rock she wanted to use first, but the thought seemed overwhelming for her. Then another voice trickled in from the top of the wall.

“Try that rock over there!” the voice said. Sienna and I looked up simultaneously to see Jonathan, another new child on the Yellow Side, gesturing to end of the wall closest to the stairs. I pointed to the rock I thought he was talking about and Sienna and I got closer. “This one?” I asked.

“No, that one over there.” Jonathan pointed to the rock at the very edge of the wall sitting close to the sand. I checked in with Sienna, reminding her of Jonathan’s suggestion and she agreed that this rock was the one she wanted to try first.

Sienna placed one foot on the edge of the rock and paused, looking up first at me, and then to Jonathan. “Now put your foot on that one” Jonathan said. I gestured again to a rock different than what Jonathan had in mind. “No there” he said gesturing to a different rock. Sensing my confusion he walked down the steps and instead of giving me the direction he focused his attention on Sienna.

We continued the process of him pointing at the rocks and me talking Sienna through what her body needed to do to reach the rock he was referring to. Step by step Jonathan and I watched Sienna’s body move higher and higher until she made it to the top.

This story, from our first morning at Little Owl, was one of those moments for me where I didn’t think to take pictures or make anything of it because it seemed so natural and effortless. At first it just seemed like part of our day, a sweet memory to mark one of the many new connections I saw forming between our children on the Yellow Side.

It wasn’t until I went home that night that I felt the true impact not only of this moment, but many others I had seen throughout the day. As I thought more about this story I reflected on all the “ordinary moments” that had happened. I thought about all the times I hadn’t grabbed the camera but should have, and all the times I wish I had written down our children’s words. I thought about those times and remembered…

I remembered when Dylan hurt his toe and all the concerned children waiting with him while I wrapped a band aid around his cut. I remembered the stories they told him about their own bumps and bruises and how they felt when they were hurt.

I remembered when Zelda said she missed her mom and just needed a hug, and the many children who rushed over to give her that small comfort.

I remembered the children, some with tears and some without, who said they missed their mommies and daddies and sisters and brothers and all the other children who openly empathized with their feelings of sadness and worry.

I remember all the children who held someone else’s hand, walked them to the bathroom, or helped them navigate this strange new place.

What I remember most from today though, was the fact that all this happened among children who were essentially strangers to each other and this environment.

In a time where kindness is absent from so many things, it is moments like these that I think we really see humanity come alive. As I reflected on these moments in the day I found myself getting teary eyed imagining a future where people acted with the same compassion for those around them. A future where even strangers could support, love, and care for one another. I imagine the future that I think our children, these children, could bring.